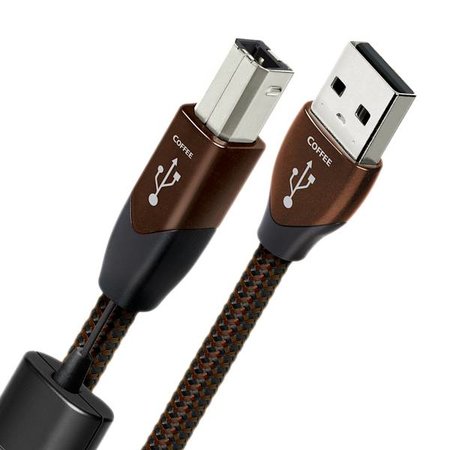 In 1982 Sony gave us “Perfect sound forever,” along with the attitude that, “it’s just digital, so all CD players sound the same.” That was disproved and qualitative differences between players became accepted truth. Next came separate transport and DAC combos, which brought with it the attitude that “all S/PDIF digital audio cables sound the same…” until that too became disproved. Now the frontier has moved once again. Is digital audio really just ones and zeros? We don’t believe so, and once you’ve had a chance to listen to Coffee USB, you won’t think so either…

SOLID 10% SILVER CONDUCTORS: Solid conductors eliminate strand-interaction distortion and reduce jitter. Solid silver-plated conductors are excellent for very high-frequency applications, like USB audio. These signals, being such a high frequency, travel almost exclusively on the surface of the conductor. As the surface is made of high-purity silver, the performance is very close to that of a solid silver cable, but priced much closer to solid copper cable. This is an incredibly cost effective way of manufacturing very high-quality USB cables.

FOAMED-POLYETHYLENE INSULATION: Any solid material adjacent to a conductor is actually part of an imperfect circuit. Wire insulation and circuit board materials all absorb energy (loss). Some of this energy is stored and then released as distortion. Coffee USB uses air-filled Foamed-Polyethylene Insulation because air absorbs next to no energy and Polyethylene is low-loss and has a benign distortion profile. Thanks to all the air in Foamed-PE, it causes much less of the out-of-focus effect common to other materials.

DIELECTRIC-BIAS SYSTEM (DBS, US Pat #s 7,126,055 & 7,872,195 B1): All insulation slows down the signal on the conductor inside. When insulation is unbiased, it slows down parts of the signal differently, a big problem for very time-sensitive multi-octave audio. AudioQuest’s DBS creates a strong, stable electrostatic field which saturates and polarizes (organizes) the molecules of the insulation. This minimizes both energy storage in the insulation and the multiple nonlinear time-delays that occur. Sound appears from a surprisingly black background with unexpected detail and dynamic contrast. The DBS battery packs will last for years. A test button and LED allow for the occasional battery check.

TERMINATIONS: Precision direct-silver plated pins are carefully attached with the very best solder. Through choice of flux and metallurgy, AQ solder has been optimized to make a low-distortion connection. The difference you hear between solders is a result of connection quality. AQ Solder does not have a high silver content because the more silver there is in solder, the more difficult it is to make a good connection.

UNIVERSAL SERIAL BUS DEVICE CLASS DEFINITION FOR AUDIO DEVICES: USB (Universal Serial BUS) was established by a stalwart group of companies such as Intel, Hewlett-Packard, and Microsoft (just to name a few) in order to give the personal computing world a truly universal standard and means to connect devices such as hard drives, printers, cameras, and, more importantly to us, audio components. Included in the original description are protocols for the pristine transfer of audio over USB. Great care and sensitivity went into this. Consequently, a computer connected to a USB-enabled digital-to-analog converter can outperform the best compact disc players available today. AudioQuest is committed to contributing products that honor USB’s ability to deliver state-of-the-art performance on this new and wonderful frontier.